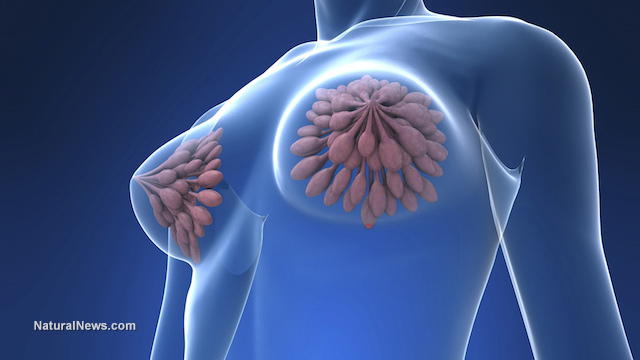 (NaturalNews) I’m certain if you were to poll women and ask whether they’d rather have lawns with no weeds or be able to keep their breasts, the answer would be the latter! And yet billions of tons of pesticides are spread all over our lawns, on our kids’ soccer fields, at our parks and on our crops, regardless of the mounting scientific evidence that directly links these toxic chemicals to breast cancer and other types of cancers.

Here’s a list of harmful but common chemicals found in our food, food packaging, food containers, and water supply as well as some ways to avoid or limit your exposure.

Bisphenol A (BPA) is in reusable plastic containers and the lining of many food and beverage cans. BPA has been linked to breast and others cancers, reproductive problems, obesity, early puberty and heart disease. Tests show that 93 percent of Americans have BPA in their bodies.

How to avoid it? Don’t buy canned food, say no to cash register receipts, since thermal paper is usually coated with BPA and avoid plastics with a triangle marked “PC” for polycarbonate or recycling label #7.

Phthalates can be found in some plastic food containers and can be endocrine disruptors. Phthalate exposure has been linked to early puberty in girls and shown to be a risk factor for breast cancer later in life. Studies have linked phthalates to hormone changes, lower sperm count, decreased mobility in sperm, birth defects in the male reproductive system, obesity, diabetes and thyroid irregularities.

How to avoid it? Just say no to plastic for food containers, toys, plastic wrap, bottled water and anything with the recycling label #3. Many personal care products have phthalates but they don’t have to be listed on the label. Check with EWG for phthalate-free products. (www.ewg.org)

Styrene can be released from Styrofoam food trays, egg cartons, disposable cups and carry out containers if they are heated, worn or put under pressure. Styrene is an animal mammary carcinogen and is possibly carcinogenic to humans.

How to avoid it? Never use anything made out of styrofoam.

Tetrachloroethylene is a chlorinated solvent used in dry cleaning, industrial cleaning and production of other chemicals and products. Tests have detected it in the bodies of a significant number of Americans. It has also been found in drinking water across the country. Once in the environment, the chemical breaks down into other known human carcinogens, including trichloroethylene (TCE) and vinyl chloride.

How to avoid it? Consider taking your dry cleaning to businesses that do not use tetrachloroethylene. The vinyl chloride can remain on clothes and be released into the air at home.

Polyvinyl chloride (PVC) is used to produce food packaging. When PVC is made, vinyl chloride may be released into the air or wastewater. It was one of the first substancees listed as a human carcinogen and has been linked to increased deaths from breast cancer and liver cancer among exposed factory workers.

Studies have shown that some herbicides and pesticides stimulate growth of breast cancer cells or cause mammary cancer in rats.

Atrazine, also known as the 21st century DDT, is being applied to corn, sorghum and other crops every year to control weeds in excess of 75 million pounds per year. Studies show that even low levels of the herbicide atrazine can turn male frogs into females that produce completely viable eggs. Atrazine is used in large quantities on corn crops in the United States and is turning up in high concentrations in our drinking water. Atrazine has been linked to breast tumors, delayed puberty and prostate inflammation in animals and it has been linked to prostate cancer in humans in recent research.

How to avoid it? Buy food that is minimally packaged in safe materials such as glass or other non-plastic containers.

DDT has been banned for agricultural use globally but it is still being used for malaria in some countries. It also continues to show up in humans and animals even where it has not been used for 30 or 40 years. Research indicates that even much earlier exposure to the chemical can still increase risk of breast cancer. This should be a huge reason to continue to fight for removal of other pesticides and toxins before their effects also go on for generations to come.

How to avoid it? Do not purchase corn products that are not from trusted local organic crops.

Zeranol has been used in the U.S. and Canadian commercial meat industries as a synthetic growth hormone for over 50 years to “beef” up their animals. Zeranol mimics the hormone estradiol and when scientists exposed cancer cells to zeranol-treated beef there was significant increase in cancer growth. Europe has banned Zeranol use as well as any imported meat treated with zeranol. (Hanrahan, 2000)

How to avoid it? Buy organic and wash all produce thoroughly.

rBGH/rBST Bovine Growth Hormone is an ongoing issue due to its potential carcinogenic effects. Several studies have shown an association between dairy intake and breast cancer in pre-menopausal women.

How to avoid it? Buy your meat from trusted local organic farms or raise your own. You might just swap out cow’s milk for coconut milk, almond milk, goat milk, feta or goat’s cheese to more easily avoid rBGH/rBST.

For more information visit breastcenterfund.org and support this important organization.