How To Overcome a Stubborn Sinus Infection Naturally

You are here: Home / Allergies / How To Overcome a Stubborn Sinus Infection Naturally

(Plus Ways To Stop Recurrences) 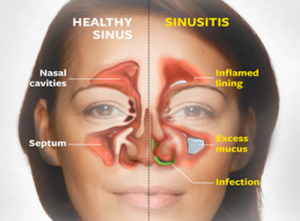 If you are constantly dealing with a recurring sinus infection or head colds, and antibiotics either don’t work or simply mask the symptoms– I have good news for you.

Millions of people end up spending thousands of dollars in over-the-counter medications and antibiotics in a desperate effort to ease the discomfort and misery.  However, there are several ways to get rid of a sinus infection naturally and safely.

How can I do that? I am glad you asked.

First,  it is important for you to learn where sinus infections are coming from, what is causing them and then target the root cause.
Let’s get you on your way to healing…

What Is a Sinus Infection or Sinusitis

A sinus infection is the swelling or inflammation of the tissue that lines the nasal passages.  On the other,  hand chronic sinus infections are called sinusitis.

Sinusitis is an inflammation of the paranasal sinuses. A more precise name for this illness is rhinosinusitis (“rhino-” meaning “nose”). In sinusitis, the mucous membranes lining the nose and the sinuses become inflamed.

The paranasal sinuses are part of the upper airways and connected to the nasal cavity. Viruses or bacteria trigger an inflammation, which causes the mucous membranes to swell up.

This may prevent fluid from draining from the sinuses. If that happens, the fluid becomes thicker and the sinuses fill up with the viscous, often yellow-green mucus. Allergies, nasal polyps, a deviated nasal septum (when the wall between the two nostrils is bent to one side) or a weakened immune system can all make sinusitis more likely.

As a result, sinuses become blocked by fluid, causing bacteria and germs to proliferate and cause further infection. A lot of people experience pain in their forehead, jaw and around their eyes, and – less commonly – toothache.

The pain usually gets worse if you lean forward, for example when getting up out of bed. Sinusitis is often associated with a fever, cough and runny nose, and it makes people feel tired and groggy. It may be acute and soon disappear again, but in rarer cases it lasts longer and becomes chronic.

What Causes A Sinus Infection

A sinus infection is generally caused by a bacterial invasion, which comes with a respiratory virus-like a cold, and oftentimes by fungal or viral infections. Furthermore, sinus infections can sometimes occur in individuals that suffer from seasonal allergies.

Statistics reveal that over 37 million Americans are infected with sinusitis every year. However, people suffering from drainage ducts blockage, common cold, nasal polyps are more likely to develop a sinus infection.

When a sinus infection sets in, swelling blocks the openings of the sinus, which keeps mucus from draining and causes other sinusitis symptoms and facial pain, swelling of the eye and nose area, and headaches.  Sinus infections mostly occur due to upper respiratory infections and colds, where the infection may become more complicated by a bacterial invasion that usually inhabits the throat and nose, and sinus cavity.

Irritation in the nasal passage from swimming, smoking, fatigue, allergies, and harsh sneezes with the mouth closed can cause a sinus infection.

During the winter months, we tend to stay indoors in the heat; a perfect breeding ground for bacteria where fresh air doesn’t circulate.   It is important to go out and get sun exposure or supplement with a high absorbency quality Liquid Vitamin D |2,000 IU’s  (Find liquid vitamin D3 here) By the way, this is what I supplement with and recommend.

It is very rear to find a great vitamin D-3 supplement in an olive oil base as most of them “especially the OTC ones” are made in a soybean oil base. GMO Vitamin D-3 anyone?

instead.   Combine Vitamin D-3  with Vitamin C and you’ll help your body heal faster from colds, the flu, and many more illnesses.   With good reason, they are called healing vitamins.

Note: Remember that it is important to supplement Vitamin K2

in conjunction with Vitamin D3 and Vitamin C

.  This great article by Dr. Mercola will explain why.

In severe cases of a sinus infection, there is a complete blockage of the sinus openings, which in turn block the discharge from coming out– thus increasing pain.

Antibiotics are often prescribed to treat acute sinusitis. Researchers from the Cochrane Collaboration wanted to know how effective antibiotics are in the treatment of inflammation in the maxillary sinuses (the most common form of sinusitis) in adults.

Five of the trials, involving a total of about 630 participants, compared antibiotics with fake (placebo) drugs.  If symptoms did not improve within one or two weeks at the latest, the researchers considered the treatment to be ineffective.

The Cochrane analysis of research on antibiotic treatment showed that maxillary sinusitis usually clears up on its own without antibiotics:

This means that an extra 7 out of 100 participants got better by taking antibiotics. In the trials that compared different antibiotics, none of the active ingredients researched was better than the other.

In some participants, antibiotics seemed to have caused stomach and bowel problems and skin rash: the data on this vary in the different trials between 2 and 23 out of 100. But only as an exception did the participants stop taking the drugs because of severe adverse effects. (source)

How To Treat A Sinus Infection During Pregnancy?

I developed several sinus infections during pregnancy and after giving birth. I think it was because I slept very little and did a lot, so my immunity plummeted.  Misery was an understatement!  It was especially challenging because I was extremely cautious with what was going into my body, which would then be transferred to my baby.  I am sure if you are here, you can relate. There is good news… keep on reading.

Anyone can benefit from an amazing technique called  Self Lymph Drainage Massage (video).  If you are pregnant you most definitely need to try the Self-Lymph Drainage massage technique if zero remedies are your choice. It is a godsend and works wonders when it comes to draining your sinuses.  This technique always works.

So How Do You Prevent Sinus Infections From Recurring?

According to a study published in the American Medical Association journal, antibiotics cannot treat a sinus infection rather, these kill beneficial bacteria in the body.

So what is the secret to stopping sinus infections from recurring, and how can they be prevented and treated naturally?  The short answer is by maintaining a strong immune system.

This is accomplished by getting a solid 7-8 hour of uninterrupted sleep— [yeah right especially with a sinus infection], I hear ya!  However, if you follow the video to drain your sinuses you will thank me forever.  Trust me, that method was the only thing that worked for me to be able to sleep.    Here is that video I am referring to just in case you missed it.

Eating a diet rich in healthy fats , and high nutrient foods such as pastured meats, wild fish, organic vegetables, and fruits.
Juicing will give you a boost of much-needed nutrients while supplementing with vitamin C.
Getting enough sun exposure or supplementing with Vitamin D

will boost your immune system to help your body do its job in healing you.

It is more beneficial to choose natural treatments to get better results in the long run rather than opting for dangerous pills and sprays, which can have severe side effects.  Keep in mind that some food groups exacerbate your symptoms. Avoid dairy, gluten, and sugar– the last one should be avoided altogether because bacteria feeds off of sugar.

So can you get rid of a sinus infection? You bet!
By following the advice above and finding the root cause of the sinus infection recurrence, you will be on your way to healing sinus infections for good.   It is going to take some investigating, diet elimination process, perhaps some not so great tasting remedies and determination, but the long-term results will be all worth it.

Do you or someone you know suffer from Sinus infections?  What do you do to ease the symptoms or even get rid of it? Share with us in the comments below.