The Best Healthy Green Plantains (Platanos) You Will Ever Have

You are here: Home / Recipes / Healthy Snacks / The Best Healthy Green Plantains (Platanos) You Will Ever Have 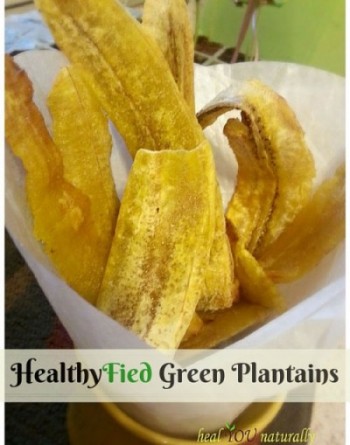 If you’ve been looking to spice up your meals with “better for your health” options, you are going to love these green plantain chips.

They are baked instead of deep-fried like the original version.   Cooked in healthy fats, and best of well- you won’t feel guilty after eating them.  Not only are they paleo, naturally gluten-free, and vegan; they are addicting!

Green plantains are a staple in Latin American cuisine, from south and central America to the Caribbean.

If you grew up in a Latin home you may recognize these delicious “fried looking” green plantains or platanos, tostones. However, we’ve been doing it all wrong and I am going to show you how to change that.

Never heard of them? then stick around, because  I am just about to introduce you to what can potentially be your new favorite food.

Wait, if plantains aren’t healthy why am I here?  Well, they are, but Not if you fry them in oils like corn, canola or soybean oil, peanut– worst yet they are all GMO’s (genetically modified organisms) known to cause cancer.

Omega 6 fats found in all of these frying oils are inflammatory, artery-clogging and overall the fastest way to cardiovascular disease and as we know now, the culprit to most diseases. Also, portion is very important when we talk about green plantains because while naturally gluten-free and better a protected starch they are still a carbohydrate.

Have a few along with a nicely balanced meal of abundant vegetables or salad, and a side of pasture-raised protein.

What Are Platanos Anyway?

Green plantains or platanos are an unripe (starchy) vegetable like a potato, with a glycemic index of 40.
According to SFGate

Green plantains are a nutrient-rich food, providing essential vitamins such as A and B-6, magnesium, potassium, copper and manganese. Instead of avoiding them because of blood-sugar concerns, pair them with a low-glycemic-index, fiber-rich food, such as a green salad, along with a protein-rich food, both of which will help lower the overall glycemic load of your meal and limit any increase in blood sugar levels.

Although plantains are starchy, they are foraging food and prehistoric humans likely had access to them as a carbohydrate source, according to Cordain. In addition, plantains are rich in fiber and lower in sugar than their relative the banana.

Plantains also contain more vitamins A and C than bananas. The paleo diet doesn’t limit how many plantains you can eat, although too much of anything isn’t a good idea.

Plantains taste and are prepared differently based on their stage of ripeness. An unripe plantain is starchy and tastes more like a potato. It’s common for those following a paleo diet to use plantains in savory dishes in place of rice or potatoes.

You’ll know the stage of ripeness based on its color. An unripe plantain is green and very firm if you press it with your fingers. In this state you can use it in soups and stews, as a side dish or snack as I am about to show you. (source)

On my last trip to Cali-Colombia (here’s a video of the city), I found out that there is a place called “El Palacio del Colesterol” or The Cholesterol Palace.  It is basically a strip of stores where vendors and clients gather up to enjoy the flavors of mainly– fried foods like the platter above. I know it looks scrumptious– but it ain’t going to look that pretty in your arteries.

The name just says it all!  There you’ll find tostones, along with other deep-fried foods like sausages, steak, chicken, blood pudding (rellena).  And for the not so faint of heart, you can find organ meats such as the liver, heart, lungs, tripe you name it– they have it.

Most Caleños (native from Cali) enjoy foods like these after a great night of their vitamin; dancing.  Dancing is what they look forward on weekends after a long work week.  Add a few shots of rum or aguardiente– Colombia’s staple hard liquor, and mainly having a blast with family or friends.

It is in places like “Tostones con Todo” or Plantains with everything, and cholesterol palace that many party-goers end up to sort of killing the hangover.    Others prefer breakfast or even chicken soup, and there are establishments open to fulfill those needs.

While our younger generation is increasingly becoming more aware of the damaging effects of eating deep-fried foods excessively, other food chains like Mc. Donalds, Pizza Hut and other fast-food chains have replaced them.   The taxing effect on their health may be even steeper when eating these new junk foods.

Why? Glad you asked…

These foods are made and cooked with Genetically Modified Organisms (GMO’s) such as GM potatoes, GM soybean oil, and meats from factory farms– where they are fed GM corn.

Unfortunately, this way of life is the beginning of how some of the worst diseases are created: Cardiovascular disease, Cancer, Alzheimer’s, Diabetes, and the list goes on.  So you can be sure, that chronic diseases have already started to show up in younger adults and even children.  Hopefully, we start changing at least the way in which food is cooked with education and awareness.

Researchers from the University of Alabama at Birmingham recently presented the results from a study at the annual International Stroke Conference in Hawaii,4 which found that people who regularly ate a traditional “Southern” diet, known for its many deep-fried foods, had a whopping 41 percent increased risk of stroke.

African-Americans had the highest risk — an incredible 63 percent higher compared to those who abstain from such foods. Lead researcher Suzanne Judd, PhD told ABC News:5

“Diet is an understudied risk factor for stroke. What was surprising about what we found was that when eating certain foods in the southern diet — fried foods, organ meats, gizzards, sweet tea — even when you account for other factors such as smoking, obesity, and physical activity, people still experienced a 30 percent increase in stroke risk.”  writes Dr. Mercola in his article Omega-6 Fats in Processed and Deep Fried Foods Can Massively Increase Your Heart Disease Risk

What are Better Choices When It Comes to Fried Foods?

The short answer is None.

Frying isn’t good for many reasons, but the two main ones are– the oils in which foods are fried and the how charred foods

The good news? Most if not all of the meats are grass-fed that come from local farmers, and vegetables are also locally sourced.

The Bad news or where do people go very wrong if they must eat fried food?  The vegetable oils = Development of most diseases as mentioned above.

See, these foods used to be fried in lard or tallow way back when our great grandmothers were children. Those fats were better choices vs vegetable oils.

Lard and tallow? Yup, lard from grass-fed cows, who weren’t fed GMO corn or pumped with antibiotics.  In her article Top 3 Reasons why you should be eating lard, Danelle explains:

How The HealthyFied Green Plantain (Platanos) Were Born

Going back to that trip and how much I wanted to eat those platanos,  I kept trying to figure out where I could find a place to buy a “healthier version” to no avail.  Being that my Mom had just had a brain stem infarct — stroke, I decided that the cravings weren’t worth it and moved on.

So what did I do?
Right after returning home and reading up on the safest ‘frying’ methods, I decided to not even waste my coconut oil in frying.  Instead, I tested batch after batch of green plantains/ platanos recipes until  I got the right texture. Best of all,  I managed to get them crunchy and delicious by baking them without compromising flavor. Nailed it– And here it is! 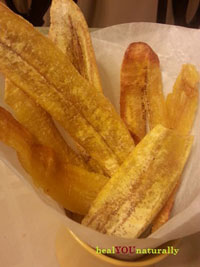 3.1
https://www.healyounaturally.com/healthified-green-plantains-recipe/
If you are going to use this recipe on your blog or website, kindly put a link back to this page. Thanks!

Don’t think you’ll remember how to peel those green plantains? No problem!  Here is a great video that shows you, just like I do:

There you have’em. The Best Healthy green plantains recipe for your next meal or snack.   You won’t feel guilty after eating them.

Question: Have you tried green plantains or platanos? If so, would you try the “Healthified” version or the fried version? You may leave a comment below.