You are here: Home / Cardiovascular Health / 10 Revealing Health Benefits of Omega 3 Plus The Best Sources to Get It From

The benefits of omega-3 are many, not to mention how important they are to achieve optimal health. Omega 3 are essential fatty acids essential for human health, but the body doesn’t make them, you have to get them from animals, and plants or even nuts –mainly walnuts.

Top nutrition authorities and other health experts stress the same, and several years of investigation  have revealed compelling evidence of the crucial role they play in achieving optimal health, and their contribution to the treatment and even reversal of several health conditions.

Omega-3 comes from both plants and animals, most notably from krill oil and fish oil.

Here are 10 health benefits of omega 3 fatty acids that are supported by scientific studies and top nutrition  experts:

Research has found that Omega-3 fatty acid supplementation has a therapeutic effect in children with ADHD.  Supplementation with long chain omega-3 may improve symptoms of depression in children and bipolar disorder (BD) in adults. In this study, 18 children were given 360 mg daily of eicosapentaenoic acid (EPA) and 1560 mg daily  of docosahexaenoic acid (DHA) grams for six weeks.

Tests, were performed before and after supplementation to assess mania, depression, fasting red blood cell count, and global function.

Clinician ratings of mania and depression were significantly lower and global functioning was significantly higher after supplementation.   (Try my #1 choice of Omega-3) which I use myself and is safe enough to give to my son.  Needless to say he loves the lemon flavor!

( I use and recommend this one) may have antioxidant properties that improve endothelial function and may contribute to its antiatherosclerotic benefits.

An 8-month treatment with omega-3 {essential fatty acids} (EPA and DHA) has a {great} outcomes, for instance minimizing inflammation, in affected individuals who have cystic fibrosis

Non-alcoholic fatty liver disease (NAFLD) has been recognized as a major health burden. It is the most important cause of chronic liver disease and a major independent cardiovascular risk factor.

In spite of that, there isn’t as of  yet, an established treatment to address NAFLD. The most commonly used treatment to reversing it is with diet (removing grains, sugar and gluten alone has a tremendous impact), along with increased physical activity.
In this study, researchers found that PUFAs had a positive impact on cardio-metabolic risk factors (hypertension, hyperlipidemia, endothelial dysfunction, and atherosclerosis) by regulating gene transcription factors.  In vitro studies, in animal models and human intervention trials, showed a positive effect of n-3 PUFAs on the severity of NAFLD.  However, they realized that the best sources of PUFAs are from fish oil, olive oil, and fats that are part of the Mediterranean diet.

The American Heart Association advises those with coronary heart disease take 1,000 mg of DHA and EPA on a regular basis while people who have substantially high triglycerides may require 2,000 to 3,000 mg per day.

Further research on the benefits of omaga 3 indicates that individuals who took 850 mg of EPA and DHA on a regular basis for 3.5 years had a 25 % much lower risk of having to a heart attack and a 45% lower risk of sudden death.

Adding EPA and DHA to the eating regimen of women who are pregnant has been found to help visual and motor development in the baby, in addition to decreasing the likelihood of allergies in infants

Higher doses of omega-3, from 200 mg to 2,500 mg daily, may help cut down symptoms of anxiety and depression. A research group at the Beer Sheva Mental Health Center conducted three studies of omega-3 fatty acids in the treatment of depression.

In the adult unipolar depression study, significant progress was found by week 3 of EPA treatment compared with placebo.  In the children’s study , an ANOVA showed  highly significant effects of omega-3 on each of the three rating scales.

In the bipolar depression study, 8 of the 10 patients who completed at least 1 month of follow-up achieved a 50% or greater reduction in Hamilton depression (Ham-D) scores within 1 month. No significant side effects were reported in any of the studies. Omega-3 fatty acids were shown to be more effective than placebo for depression in both adults and children in small controlled studies and in an open study of bipolar depression.  [5]

In a single research study, older volunteers struggling with poor memory saw notable improvement after taking 900 mg of DHA each day for several weeks, in comparison to controls.

Another research study discovered considerable enhancement of verbal fluency results immediately after taking 800 mg of DHA per day for several months when compared with placebo.

What are the top sources to get the best Omega-3?

Based on research above, and what I have personally used and recommended through out the years is as follows: 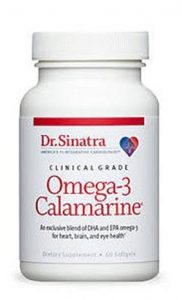 There was a significant decline in SLAM-R score from 6.12 to 4.69 (p < 0.05) in those subjects taking fish oil compared to placebo. No significant effect on SLAM-R was observed in subjects taking copper.  Fish oil supplementation has a beneficial effect on murine models of SLE, while exogenous copper can decrease the formation of lupus erythematosus cells in rats with a hydralazine-induced collagen disease.
Finally, In the management of SLE, dietary supplementation with fish oil may be beneficial in modifying symptomatic disease activity.

What are The Best Sources of Animal Omega 3 Fatty Acids?

According to the Environmental Working Group (EWG) – my go-to organization to healthy foods and products guides, most government, and standard public health references don’t tell you – so EWG will. EWG’s extensive analysis of the latest scientific research on seafood, omega-3s and mercury boils down to this easy guide.

Fish and shellfish are low in fat, high in protein and good sources of iodine, vitamin D, and selenium, often deficient in the Western diet. But decades of industrial activity, particularly emissions from coal-fired power plants, have released mercury and other pollutants into oceans and waterways.

Those contaminants end up in seafood.  While most commercial fish and shellfish contain some mercury, concentrations vary depending on the fishes’ ages, diet, region of harvest and other factors. Large predatory fish, including tuna, shark, marlin and swordfish, which eat smaller fish, accumulate considerable mercury over their life spans that may run decades.

Omega-3 concentrations vary widely among species but are typically highest in species that dwell in cold water and have oily flesh Ei: Salmon

.  Some fish species are high in mercury but low in omega-3s. Others have higher concentrations of omega-3s with very little mercury.  [4]

Here is a great guide by the Environmental Working Group of the best and safest seafood and which ones to avoid.

There are conflicting reports on cod liver oil because of its vitamin A and Vitamin D ratios.  However,  the Weston price institute has conducted their own research  to sort out the controversy. Here is an excerpt:

For centuries, cod liver oil has served as a valuable source of vitamins A and D and omega-3 fatty acids. It was a critical component of Weston Price’s program for reversing tooth decay and many practitioners in his day used it to treat eye diseases, rickets, and infections. Along with many other physicians, Dr. Price recommended cod liver oil (here’s one of the best cod liver oils)

). Clinical trials proved that cod liver oil use in adults reduced absenteeism and saved millions of dollars worth of productivity for American industry.  (Read the full article here).
Important note for Pregnant Women:  The EWG advises: Although fish oil supplements are a healthy choice during pregnancy, fish liver oil supplements, such as cod liver oil, are not. These oils contain a lot of vitamin A, which can cause birth defects when taken in excess during pregnancy. [6]

Fish oil is one of the easiest and main ways in which people enhance their consumption of omega-3 fats. Excellent fish oils can definitely supply many health benefits. Nonetheless, this oil is weaker in antioxidants. Because of this your need for additional antioxidant protection.

This will happen because fish oil is a bit delicate, and oxidation leads to the development of detrimental free radicals. Antioxidants are consequently necessary to guarantee that the fish oil doesn’t oxidize and become rancid in your system.  Here is my favorite fish oil supplement

and what I recommend. I also consume this one which is kids friendly, and what I give it to my son.

This is of the best sources of animal-based omega-3 fats. Krill oil

antioxidant strength is 48 times higher compared to fish oil. It also incorporates astaxanthin, a marine-source flavonoid that produces a certain bond with the EPA and DHA to help direct metabolism of the natural antioxidants, that makes them much more bioavailable.

Krill  are small, shrimp-like creatures that are a cherished  in Asia since the 19th century or earlier.  Japanese call it–  Okiami.

What’s your favorite way to add Omega 3 to your diet?  Animal or plant resources? Share your comments below.

Other Resources on Omega 3 Fatty Acids You May Find Useful

6 Ingredient Juice For an Immediate Boost of Vitamins A,C,B6 and Minerals
Next Post: Empowering Approach To Preventing, Living With Diabetes or and Alzheimer’s Disease »