Microwave Popcorn Is Toxic, Here’s A Better Option For You

You are here: Home / Recipes / Healthy Snacks / Microwave Popcorn Is Toxic, Here’s A Better Option For You

Do you remember those movie nights growing up, where the sound and smell of freshly popped corn made the movie and family get together so much nicer?

Ahh!!! Those were the days! You had nothing to worry about…

No weird oils, chemicals or Genetically Engineered (GE) foods. All you had to do was enjoy the movie and your homemade popcorn.

Today is different though.  You have to worry about those things– especially because of the recent findings linking GMO foods to gastrointestinal damage, and cancerous tumors in lab rats.

See, the problem with convenience is that by saving time there are usually major alterations to food, the ingredients, and chemicals in or the packaging.  Enter microwave popcorn. While it is fast to make, there are things that you should know before you microwave another bag.

Here is the latest on microwaved popcorn:

The George Mateljan Foundation for the World’s Healthiest Foods has concerns regarding microwave popcorn.

Mr. Mateljan warns that microwaving of popcorn does not provide a risk-free alternative. That’s because there has been some evidence that the Teflon-like coating of some bags used for it can get broken down with heat into unwanted substances, including perfluorooctanoic acid (PFOA).

The chemical, which appears to be potentially carcinogenic in lab animals, is partially released onto the popcorn when the bag is heated up and can then be absorbed, once again in partial amounts, into the bloodstream.

The U.S. Food and Drug Administration (FDA) is currently studying the effects of this chemical in more detail. Additionally, the U.S. Environmental Protection Agency (EPA) is studying potential problems associated with the artificial butter flavoring used in microwave popcorn.

If you have been following me for a while, you know that I am all for wholesome foods, growing my own organic vegetables, and supporting local farms. I do not agree with food being Genetically Engineered aka Genetically Modified Organisms (GMO’s).

I try to do my parts as a Non-GMO and organic foods advocate, who wants to make sure that our children will have good, safe, nourishing foods in the future– like you and I did growing up.
I want to leave this earth knowing that I was part of the movement to change our food system back to the way it was for our future generations.

Genetically Engineered foods are not allowed in the production of certified organic foods.

The price difference is no longer high compared to non-organic popcorn so why not?  On the other hand, genetically engineered popcorn contains toxic residues commonly found on conventionally grown corn with pesticides– I call that double trouble for obvious reasons.

Now let’s take a look at what GMO’s are all about:

A GMO (genetically modified organism) is the result of a laboratory process of taking genes from one species and inserting them into another in an attempt to obtain a desired trait or characteristic, hence they are also known as transgenic organisms. This process may be called either Genetic Engineering (GE) or Genetic Modification (GM); they are one and the same.

No. The only feeding study done with humans showed that GMOs survived inside the stomach of the people eating GMO food. No follow-up studies were done.

So Which Popcorn Is Safer And Healthier?

Popcorn itself is a healthy low-calorie snack.  When you cook it in avocado oil, coconut oil, or pastured butter you will be adding the benefits of those healthy fats. Additionally, you’ll get Conjugated Linoleic Acid (CLA) from the butter and Omega 3’s and polyphenols from the coconut oils.

Coconut oils is my fat of choice here because it is ideal for cooking in high temperatures as it doesn’t oxidize like olive oil does.   Now, if you want to take it a step further you can air pop it for an oil-free version.

So, for the reasons mentioned above, I recommend organic non-GMO popcorn.  If you can’t find organic popping corn, at least get the organic one in the bag made with real butter or palm kernel oil

Tip: Know what I do when there is nothing but microwave popcorn?

I warm up the coconut oil or pastured butter

as usual.  Then empty the contents of the bag into the hot oil and cook covered until all the kernels have popped.
That way, I bypass heating the bag and its contents in the microwave.  Bang!  Healthified popcorn on the spot (grin).  When all else fails and microwave popcorn is the only option. I’d recommend doing the above step and using this one microwave popcorn

Here is the recipe to the best homemade popcorn– plus a little trick. 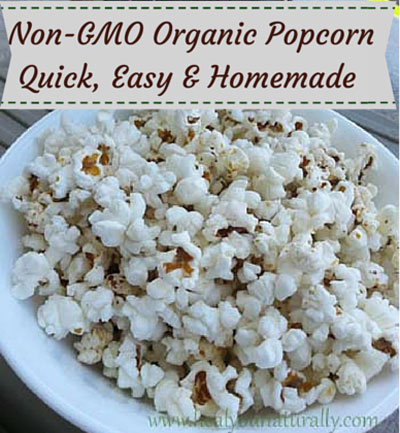 The Trick~ My sister's popcorn was always perfect! What was her secret? All she did was to soak up the kernels in water for about 15 minutes before making the popcorn. That's it! Her theory was that when you soak the kernel they soften up, allowing them to pop faster. Does it work? Absolutely! No matter what, none of us made such great popcorn in such short period of time. Hers was always the best. Give it a try and let me know how it goes 🙂

PS: make sure you drain and towel dry the kernels before you add them to the cooking oil. Ya do not want to add water to cooking oil.

3.1
https://www.healyounaturally.com/microwave-popcorn-is-toxic/
If you are going to use this recipe on your blog or website, kindly put a link back to this page. Thanks!

So there you have it. An easy, healthy and satisfying snack.

Ideally, we shouldn’t have to worry about our food.  I feel that food manufacturers should really stop greed and go back to basics sooner rather than later. We need it, our earth needs it and so do our future generations. They need to start protecting what we once had– organic, sustainable, nourishing foods.

I’m wondering what you think about certified organic vs Genetically Engineered popcorn.
Can you tell the difference?
Does it even matter to you? Tell me about your experience in the comments below.

Beware! These Rx Meds Can Cause Deadly Side Effects to Your Body
Next Post: Coconut Ice Pops Sugar, Gluten & Dairy Free + (Easy Recipe)