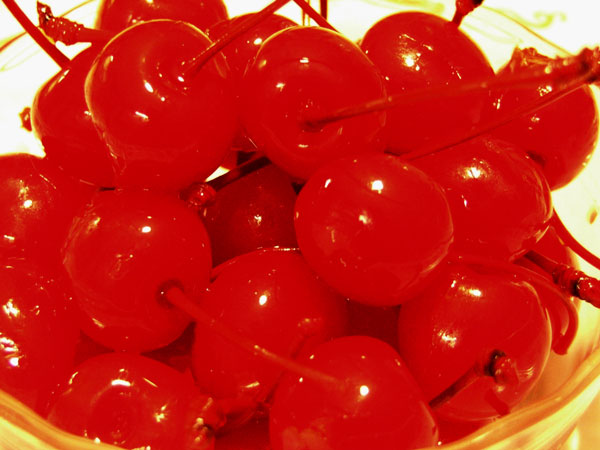 FD&C Red #4, also known as Scarlet GN, was banned as a food additive in 1960. Today it is banned in Europe; in the United States it is allowed only in externally applied drugs and cosmetics. It is not allowed in products that are applied near the eye.

Despite this, Red #4 is added to Maraschino cherries.  This has been happening because the US government considers the cherries decorations, not food.

Originally, Maraschino cherries were cherries from the marasca cherry, of Croatia.  They would be crushed and preserved in what eventually would become a maraschino liqueur.  In the 1920’s, during the prohibition of alcohol in the United States, companies began soaking the cherries in a brine solution rather than alcohol.  Chemicals and coloring, including Red #4, were added until 1960, when it was banned because it was not considered “suitable and safe” by the newly empowered FDA.  In 1965, it was again allowed to be added to the cherries because they were re-classified as decorations.

Keep in mind that not all Maraschino cherries are made with Red #4.  Some contain Red #40 which contains benzidene, a human and animal cancer causing agent.

The good news is that some Maraschino cherries do not contain food coloring.  If you look around, you can find organic cherries with a minimum of added ingredients.  Make sure to read the labels and research the food you’re eating.

This article has been republished under a creative commons license

,Read the article from its original source at minds.com  (This blog is free & open source, however embeds may not be.)

Search for an organic or Natural Product